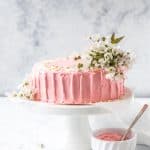 A simple, light Coconut Raspberry Sponge Cake with a subtle coconut flavour, filled with sweet raspberry jam and covered in raspberry frosting. This cake will be a delight on any dessert table.

I first made this in May when the trees of London were laden with white and pink blossom, the air was warming up and days were slowly getting longer. These delicate white flowers proved to be the perfect decoration for this light, moist cake.

Are you with me or are you with me? I adore coconut. Having spent many years in Asia growing up, I developed such a strong love for coconut in all its forms, its flesh, milk, cream, water, toasted flakes ... you name it, I like it. (Actually...you can keep coconut oil..just saying). Let’s not get started with coconut and chocolate...oh hello Bounty chocolate bar!

However, I do know that there are a few out there that aren’t fans...um hello my two girls. Are we even related??! As I was baking this I asked them to promise me that they would have a taste instead of ruling it out at the mere mention of coconut. Why? Because I knew that this was too good to be missed. The coconut is subtle here and isn’t over powering. Yes it has desiccated coconut in it but this provides the perfect nod to the coconut taste needed.

So once in a while I just want easy. Easy sponge cake, easy filling, easy frosting. Sometimes we don’t have hours slaving away over multiple stages of a recipe. The day I made this, was one of those days and so without a second thought I picked up my jar of Bonne Maman Raspberry Conserve and slathered it over the bottom layer of the cake. I adore Bonne Maman products and remember many an afternoon tea as a child being given baguette with butter and Bonne Maman jam.

You want to know the best bit? Once made, if you leave the cake overnight that jam soaks into the sponge above and below it leaving you with a delicious, jamie, sticky sponge centre. Oh yeah. So good!

Does raspberry pair well with coconut?

One hundred percent absolutely. Raspberry and coconut is a perfect flavour pairing for the warmer months. It has such a tropical vibe to it and will have you coming back for more. Imagine coconut ice-cream swirled with raspberry coulis and drizzled with chocolate sauce. I think I might just have to make that!

For the buttercream I simply let half a cup of frozen raspberries de-frost and then placed them in a sieve over a bowl and pushed the pulp and juice through the sieve. Then on the stove top I reduced the raspberry juice until it was a thicker consistency, this only took a few minutes. After beating the butter and and icing sugar together I then added the freshly squeezed raspberry pulp to the buttercream for the flavour but also for that beautiful shade of pink.

So... how did my two daughters fair eating my cake? What do you know...they loved it. Absolute truth! The coconut isn’t over powering and teamed with the raspberry buttercream they had a slice after school three days in a row. Now that’s saying something!!

With only two simple components this really is a simple cake to throw together.

To make the buttercream we first have to create raspberry juice.

What more ideas of desserts filled with fruit? Check out these: 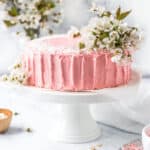