These Earl Grey Cupcakes are infused with the fragrant earl grey tea leaves and then have the surprise filling of sweet blackberry curd. They’re then topped with swirls of cream cheese frosting and the combination results in a flavour bomb perfection in your mouth. It’s hard to stop at one.

I think it’s official- these cupcakes might just be my favourite flavour combination to date. I am obsessed with anything with earl grey tea in it. I love love love the subtle, fragrant citrus hit that infuses into the cupcake. It’s such a particular aroma and taste recognisable anywhere!

Inside the cupcake you get the surprise addition of blackberry curd ... a sweet curd with a slight tang, it makes a beautiful flavour combination with the earl grey. The cupcake sponge and blackberry curd aren’t overly sweet so I didn’t want to use a standard vanilla buttercream as I find it lends itself to being a bit too sweet sometimes. Cream cheese frosting on the other hand adds all the creaminess without the overly sweetness - it’s perfect! Totally more-ish. The best addition to this style of cupcake.

How do you infuse the tea to make Earl Grey Cupcakes?

Earl Grey can be quite subtle in flavour so in this recipe I wanted to get maximum flavour by adding the fragrant bergamot infused leaves twice into the cupcakes.

The first way is by infusing the leaves into the milk that’s going to be added to the cupcakes. You do this by adding some tea bags to the milk you’re going to use in the batter. Gently heat the milk until its warm and allow the teabags to brew slowly. By then letting the milk cool with the tea bags in it, the infusion process continues. Once cool, remove the tea bags and you’re left with an earl grey flavour bomb in your milk!

The second way is literally to add the contents of two tea bags into the cupcake batter. You’ll see the black specks of the tea leaves throughout the cupcakes so there’ll be no doubt that you added Earl Grey to your cupcakes. You can smell it, see it and taste it!

Is Blackberry Curd easy to make?

If you follow my step-by-step method you’ll realise just how easy it is to make this divine curd. I’m a true curd fan. I believe it can be the best addition to so many types of desserts, tats, cakes, donuts, pancakes ... the list goes on.

And on top of that there are so many fruit variations that you can try. Lemon, raspberry, passionfruit, orange being just a few.

So how do we make it?

And there you have it, a bowl of sweet with a slight tangy, delicious blackberry curd. The recipe makes more than you need but if you are going to the effort of making it then there may swell be left overs!! 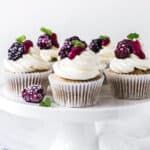