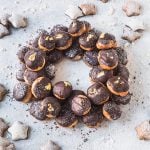 This Mocha Profiteroles Wreath is the perfect show stopper for your holiday dessert table. Crisp choux buns filled with softly whipped espresso cream and dipped in dark chocolate are piled into the shape of a Christmas wreath for some festive cheer.

At least once during the Holiday season, you'll need a dessert with that wow factor. And this profiteroles wreath is it! Much like my Gingerbread Swiss Roll Cake, Cranberry Mini Pavlovas and Clementine Dulce de Leche Cake, it's a dessert to impress.

The classic french choux buns are crisp and golden and filled with a simple whipped cream flavoured with coffee and chocolate (such a dreamy combination, am I right?!). Each choux bun is dipped in melted dark chocolate. Once set, the buns are piled into the shape of a wreath and decorated with finishing touches.

This profiteroles wreath dessert looks fantastic, but more importantly, each profiterole is a delight. The buns are crisp to bite into, and the sweetened coffee cream is a surprise. The dark chocolate compliments the sweetness of the cream. What a special dessert!

Each component (choux pastry, filling and topping) of the profiteroles wreath has a simple list of ingredients. A basic choux dough has water, butter, flour and eggs- that's it! I add in a little sugar and salt, but that's my preference; they can be omitted if you prefer.

Choux pastry or pâte a choux can be really intimidating to make. But follow along as I guide you through, showing you the areas to take particular note, so that you can master them like a professional French pastry chef.

The dough for cream puffs can be quite tricky to master as we rely on visual cues and the feel of the dough to know it has reached the right consistency. I’ve included plenty of images to guide you through this process so that you can master these beauties too. This is the best recipe for cream puffs!

2. Add flour. Remove the pan from the heat, then add the flour into the saucepan and, using a wooden spoon, mix together vigorously. Return to the heat and beat the mixture for 4 minutes until a ball forms and a film shows on the bottom of the pan. (Image 3 & 4)

TIP: Beating for long enough will allow the flour to be cooked out but also for some of the moisture from the butter and water to evaporate, thus dehydrating the dough, which helps get the rise in the oven.

3. Beat to release the steam. Add the mixture from the saucepan into the bowl of a stand mixer fitted with the paddle attachment. Beat for 1-minute on low or until you don’t see any more steam coming out of the bowl. We need to cool the mixture down before adding the eggs otherwise, they’ll scramble. (Image 5 & 6)

4. Beat in eggs. With the mixer on medium speed, gradually pour in the eggs and mix. (Image 7). It’ll look curdled (image 8) but keep going, and it will come together.

TIP: Don't add all the eggs at once. Add them in gradually. I suggest adding up to ¾ of 4 whisked eggs and then beating for up to two minutes to see how the mixture comes together. You can always add in a bit more egg but if you add in too much, there's no going back.

The consistency. This is one of those doughs where you must rely on visual cues to know when it's ready. There are a couple of telltale signs.

TIP: If the batter isn't of the right consistency, then add a little more of the whisked egg. In the ingredients list, I have listed a 5th egg. You'll probably only need a little of it, but how long you cook out the butter and water in the saucepan, the gluten in the flour, the size of your eggs, all contribute to how much egg you'll need. Set aside any remaining for egg wash later.

Brush the parchment paper with water around the buns. This produces more steam in the oven providing extra lift for the buns to puff up. (Image 12)

6. Prep choux on the tray. With a wet finger, smooth down the points of the buns. This will prevent them from burning in the oven (Image 13)

With the remaining whisked egg, add the milk and brush egg wash onto the buns.(Image 14)

7. Bake: Bake in the oven for ten minutes before turning the oven down to 180C (350F) and continue to bake for 25-30 minutes or until buns are golden brown and crisp. Do NOT open the oven before this point, as releasing the steam from the oven will cause the buns to deflate.

With a skewer, make holes in the bottom of each bun (Image 15) then return the tray to the oven for 5 minutes. (Image 16) Place buns on a wire rack and allow to cool.

TIP: By making the holes in the buns, you allow the steam and heat to release from within the bun cavity. The extra five minutes in the oven allows the shell to crisp further and dries out the inside.

Make the filling and topping

8. Whip espresso cream. Add the cream into the bowl of a stand mixer, then sift in the powdered icing sugar, cocoa powder and espresso powder. I'm all about saving on washing up, so sift these right over the cream! Whisk on medium until soft peaks form. Fill a piping bag fitted with a small piping tip. (Image 17 & 18)

10. Fill and decorate choux buns. Push the piping tip through the hole you made to release steam and fill the choux bun with espresso cream. You'll know when it's filled up as it will feel heavier in your hand, and a bit of cream will ooze out of the top. You'll know it's full at this point.

Dip the top of each filled choux bun into the melted chocolate, letting any excess drip off. Then set aside for the chocolate to set. Place profiteroles into a circle, piling them onto one another, making your profiteroles wreath. I sprinkled some gold star sprinkles over the top and added some holly as a festive touch.

Why is my choux dough runny?

Why is my choux bun flat?

The oven may not have been hot enough when the choux balls went in. Or the oven door was opened before the balls had a chance to rise and then set in that position.

What’s the difference between a cream puff and a profiterole?

Typically a cream puff is filled with vanilla pastry cream or whipped cream, as in our recipe today. Profiteroles, on the other hand, are filled with ice cream and dipped in chocolate ganache.

To Store: Once filled, Cherry Cream Puffs are best eaten within a few hours. Store unfilled cream puff shells in an airtight container for up to 2 days in the refrigerator. Re-crisp the shells in a hot oven for 5 minutes.

Filled profiteroles can be stored in an airtight container and refrigerated for 2-3 days. Note that the moisture of the cream may make the bottom slightly softer.

To Freeze: Cream puff shells can be frozen in a freezer-safe container for up to 2 months. Thaw in the refrigerator overnight and re-crips in a hot oven for 5 minutes.

If you tried this Mocha Profiteroles Recipe or any other recipe on my website, please let me know how you go in the comments below. I love hearing from you. Also, please leave a star rating whilst you're there!

Don't forget to subscribe to the newsletter so that you don’t miss out on more delicious food, tips and news but also the chance to download your FREE DESSERT E-BOOK! Happy baking, friends!

This post was originally published in December 2019 but has been updated with new photos, new content and a revised recipe. 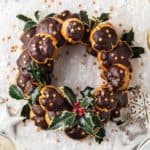 To assemble and decorate

Step-by-Step Photos: My blog post includes helpful step-by-step photos to help guide you through making this recipe. To Store: Once filled, Cherry Cream Puffs are best eaten within a few hours. Store unfilled cream puff shells in an airtight container for up to 2 days in the refrigerator. Re-crisp the shells in a hot oven for 5 minutes. Filled profiteroles can be stored in an airtight container and refrigerated for 2-3 days. Note that the moisture of the cream may make the bottom slightly softer.  To Freeze: Cream puff shells can be frozen in a freezer-safe container for up to 2 months. Thaw in the refrigerator overnight and re-crips in a hot oven for 5 minutes. TIP 1: Weigh your ingredients. Use digital scales for an accurate measurement. This is imperative for this type of recipe TIP 2: Add eggs in gradually. Everyone will use a slightly different amount of eggs due to the factors I’ve listed in the post. Adding the eggs in bit by bit will keep you in control of the consistency of the dough. Just remember: Too little egg = you can add more. Too much egg = dough is ruined. TIP 3: Hold the piping bag upright. When piping the buns, hold the bag upright to make the buns as round as possible.  TIP 4: Don't open the oven. The moisture in the dough and the water droplets on the parchment paper aid in lifting the dough up and the heat of the oven then sets it in place creating the puffed up balls. If you let the steam out of the oven too early you’ll have flat buns.