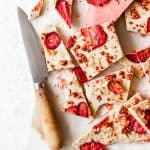 Strawberry Shortcake White Chocolate Bark is the cutest Valentine’s Day gift you could give a friend or lover! An incredible combination of pure white chocolate and strawberry flavoured chocolate gets topped with crumbled shortbread for texture and more freeze-dried strawberries for taste. Not only does this look fabulous, but it tastes amazing and is super simple to make.

Chocolate Bark has to be one of the easiest sweet treat snacks that can come out of your kitchen. With just a handful of ingredients, you can have a fun, flavourful snack on hand or share around. Chocolate Chip Scones, Chocolate Hazelnut Granola Bars and my Cherry Filled Lamingtons are three other family favourites we love. Admittedly, not as easy to make as white chocolate bark, but hey, sometimes a bit of effort goes a long way.

Back to this fun White Chocolate Bark with a strawberry shortcake twist. Valentine's Day isn't too far away, and I wanted to share this gorgeous take on white chocolate bark. For whatever reason, strawberries are synonymous with Valentine's Day, so I thought I would incorporate them into this chocolate bark. It's super quick and easy to do but makes a fantastic gift.

I love chocolate bark as a gift. Why? Because it's easy to make, super delicious, and when all wrapped up, it looks fantastic!!! Brilliant right?! And the best bit about this Strawberry Shortcake version of White Chocolate Bark is that you only need four ingredients to make it!

How to make white chocolate bark

As simple a recipe as this could be, I want to teach you a new trick that will make it ten times better. We're going to temper the white chocolate before using it. Don't freak out, bare with me. Read on with the first step of this recipe, and you'll learn why you do this extra step and, most importantly, how!

You’ve probably seen people tempering chocolate on a marble slab swooshing it around like there’s no tomorrow (!) Forget all of that, we’re going for the easier method!

Using a simple bain-marie (or double boiler) and add two-thirds of the chopped white chocolate and stir continuously until fully melted. Use a thermometer to test the temperature of the chocolate- it should be between 37-43C (100-110F) (Image 1).

TIP: What is a bain mari, or double boiler?

Once melted to that specific temperature, add the remaining chopped white chocolate into the melted chocolate (Image 2) and continue to stir to melt these newly added chunks. Keep that candy thermometer on hand, as by the time the temperature of chocolate lowers to 29-30C (84-86F), the chocolate will be tempered! (Image 3)You've done it! Hoorah!

2. Make the strawberry chocolate. Pour one-third of the white chocolate into a separate bowl and add in the freeze-dried strawberry powder, then give it a good stir until fully mixed together. It's the most insanely gorgeous colour, pink! (Image 4)

3. Create a strawberry layer and sprinkle with toppings. Pour the strawberry white chocolate that you've just mixed together onto a baking tray lined with parchment paper. Use an offset spatula to spread out the chocolate evenly on the tray. Then crumble shortbread biscuits and freeze-dried strawberries over the top. (Image 5 & 6)

TIP: If the remaining white chocolate has solidified during this time, then simply reheat in the bain-marie until fully melted.

Allow the white chocolate bark to set at room temperature until it hardens. It can take 2-3 hours for this to happen. Then using a sharp knife, slice up into chunks. Add it into clear bags and tie it with string or ribbon for a cute gift!

The world is your oyster when it comes to chocolate bark. Replace the white chocolate for milk or dark chocolate, or even melt two types and pour one over the other and swirl it through. Here are some of my favourite variations of chocolate bark.

What if I don't have a candy/sugar thermometer?

Don't worry. Still make it. Just follow my method of melting ⅔ of the chocolate in a double boiler, then when it's melted, add the remaining chocolate and stir until it's melted fully. This is a super glossed-over way of doing it, and I can't guarantee that it will temper correctly- but at least you have had a go and can still enjoy this chocolate bark.

As mentioned in my ingredients section, my favourite brands are Lindt, Green & Blacks and Callebaut. Other brands available throughout the US are Ghiradelli, Guittard and Valrhona Chocolate.

To freeze: Yes, you can freeze chocolate bark. But it needs to be done properly. Wrap the bark up well in plastic wrap or parchment paper and then store it in an airtight container or freezer-safe ziplock bag that will let in zero moisture. Freeze for up to 3 months. Thaw by leaving out at room temperature, still wrapped up in its container, allowing it to thaw gradually.

If you tried this Strawberry White Chocolate Bark or any other recipe on my website, please let me know how you go in the comments below. I love hearing from you. Also, please leave a star rating whilst you're there!

Don't forget to subscribe to the newsletter so that you don’t miss out on more delicious food, tips and news but also the chance to download your FREE DESSERT E-BOOK! Happy baking, friends!

Normally I would provide grams and cups/tablespoons in my ingredients. But for the freeze-dried strawberries, I have used tablespoons. They are so lightweight that they barely register on the scales! Step-by-Step Photos: My blog post includes helpful step-by-step photos to help guide you through making this recipe. To store: Store white chocolate bark in an airtight container in a cool, dry place. Properly tempered chocolate should last for several weeks. If stored in the refrigerator, make sure the bark is in a properly sealed airtight container so that no moisture or smells seeps into the chocolate. To freeze: Yes you actually can freeze chocolate bark. But it needs to be done properly. Wrap the bark up well in plastic wrap or parchment paper and then store it in an airtight container or freezer-safe ziplock bag that will let in zero moisture. Freeze for up to 3 months. Thaw by leaving out at room temperature, still wrapped up in its container allowing it to thaw gradually. TIP 1: Buy the best quality chocolate that you can afford. The more you put in...the more you’ll get out (like everything in life!) TIP 2: Don’t let water come into contact with the chocolate when melting otherwise it will seal. TIP 3: Spread chocolate thinly and work quickly to add toppings before the chocolate sets. TIP 4: Don't refrigerate the chocolate as it will form condensation.

More Snacks for Every Occasion