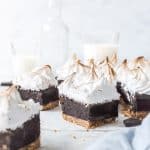 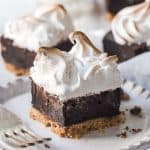 These Fudgy S'mores Brownies combine all the best flavours of campfire treats. A crunchy biscuit base is topped with a fudgy, decadent brownie layer and finished off with a gooey, toasted marshmallow layer. This is the ultimate treat!

My household loves brownies with a passion. They make the perfect snack, or dessert or bring along a treat to a party. My Chocolate Cherrie Brownies, Small-Batch Salted Caramel Brownies and Triple Chocolate Brownies, always go down a treat. And I also have a delicious Raspberry White Chocolate Brownie recipe in my Small Batch Desserts E-book when you subscribe.

As a family, we aren't campers. And I know that toasting marshmallows over an open fire and squishing them with chocolate between two crackers, is a quintessential part of camping. Well, I don't want to miss out on all the fun, so set about getting all those campfire flavours at home.

These Fudgy S'mores Brownies hit all the s'mores cravings. Fudgy, rich brownie layer sandwiched between a crunchy biscuit layer and a gooey, toasted marshmallow layer on the top. Every component complements the other and works perfectly. Close your eyes and you'll be sitting in the woods next to a roaring fire pit! My Toasted Marshmallow Ice Cream hits all the right spots for summer frozen treat vibes.

If we're replicating the flavours of s'more, what exactly are they? S’mores are a toasted marshmallow and a square of chocolate sandwiched between two graham crackers. The first published recipe was by the Girl Scouts in the US in 1927 and here they documented the toasting of the marshmallow in a campfire before constructing the s’mores. Head on over for more little-known S’mores facts over on Real Simple.

All the ingredients in this layered s'mores brownies recipe are standard store cupboard ingredients. I'll give you options where I can so that you can whip this together in no time without the fuss of having to visit the store. If you fancy going a little extra- drizzle some Hot Fudge Sauce over the top.

As mentioned, to re-create the s'mores flavours, we need the three elements, the graham cracker, chocolate bar and marshmallow layers, but we need to turn them into dessert form. So a biscuit layer crust, like a cheesecake, is baked with the fudgy, uber chocolatey brownies layer on top. To get the ultimate toasty marshmallow layer, we recreate the toasty flames with a blowtorch (or under the grill/broiler). Each step is uncomplicated and you have these ready to enjoy in under an hour.

1. Preheat the oven and prepare the pan. Turn the oven on to 180°C (350°F) and line a 23cm (9-inch) square baking pan with parchment paper. (Image 1)
TIP: Leave an overhang around all sides (this will make it easier for you to remove the brownies once cooled)

2. Crush the biscuits and mix with butter. Add biscuits (or graham crackers) to a large sandwich bag a crush with a rolling pin until they are in crumbs. (Image 2)
Pour the biscuit crumbs into a bowl and mix in the sugar and butter until it resembles wet sand. (Image 3)

3. Pour into pan and compact. Pour the biscuit crumbs (or buttery graham cracker crumbs) into the prepared pan and pack them down firmly until in an even layer. (Image 4)
Bake for 10 minutes and then put to one side whilst you make the brownie layer.

TIP: I use a ⅓ measuring cup to do this. The base and sides are flat allowing me to get a super even base layer.)

1. Melt the chocolate and butter. I use a bain-marie to melt these two ingredients. Simply glaze a heatproof bowl over a saucepan of simmering water (make sure the bottom doesn’t touch though. (Image 5). Stir continuously until the chocolate has fully melted. (Image 6)

TIP: You can use the microwave for this step if you’d prefer. Heat the butter and chocolate in 20-second increments in the microwave, stirring in between each burst. Continue until all the chocolate and butter has melted.

2. Whisk the eggs and sugar. In a bowl, whisk the eggs, sugar and vanilla extract together until it's visibly paler and thicker. I use a handheld electric whisk but feel free to use a stand mixer or whisk by hand. (Image 7)

Add chocolate. Whilst still whisking, add in the melted chocolate and whisk until combined. (Image 8)

3. Sift in dry ingredients. Sift in the flour, cocoa powder, baking powder and salt (Image 9) and fold through. Don’t over mix otherwise you might deflate the eggs.

4. Pour into the pan and bake. Pour batter onto the top of the biscuit base and smooth out with an offset spatular. (Image 10)
Bake for 20-25 minutes until the sides are set but the centre has a slight jiggle.

Three components in this recipe. I get that it can feel like a recipe is getting a little complicated with three components. So I'm going to share with you two shortcuts that if you are time-poor, you can use!!

The Biscuit Base: If you want to really simplify the process of making these, then don't worry about making the biscuit base. Simply lay the graham crackers on the base of the prepared pan and pour the brownie mix directly onto the crackers and bake as per the recipe.

The Brownie Layer: Box Mix. Yep, I said. Go the box mix. I'd rather you enjoy this recipe using a shortcut than not trying this recipe out at all. Use your favourite box mix but I ask one thing, check out my Caramel Brownie ice cream where I have a couple of juicy, easy tips to make your boxed mix brownies heaps better.

TIP 1: Leave an overhang around all sides of your baking pan. The brownies can be removed from the baking pan seamlessly and easily.

TIP 2: Compact biscuit base. Make sure the biscuit base has been pressed down really well to encakier doesn't crumble apart once baked.

TIP 4: Use a hot knife to get clean cuts. Wait for the brownies to cool and then refrigerate for at least one hour before cutting. Then heat the blade of a sharp knife under hot water, wipe dry and slice. Heat and dry before every cut.

What exactly is Marshmallow Fluff?

Marshmallow Fluff, Creme or Spread is an American confectionary spread that's very similar to the taste of marshmallows but a different consistency. It's very light, airy, fluffy and sweet. it can be used to fill cases, top puddings or toast, as you would d normal marshmallows.
Furthermore, it comes in a jar. Not widely available in the UK, like it is in America, the larger supermarkets are starting to stock it in the condiments aisle. I bought mine in my Sainsbury's supermarket.

How can I tell when my brownies are done?

You'll know that they are done when they are set around the edges of the pan but have a slight jiggle in the centre. Remember, the brownies continue to cook internally when you pull them from the oven and place the pan on the wire rack. If you overbake the brownies you'll end up with a cakier inside as opposed to a fudgy inside.

Can I bake these in an 8x8 baking pan?

Technically yes. Saying that though. the volume of ingredients will be a little too much for an 8x8inch baking pan in my opinion. If you decide to use all the ingredients in the smaller pan, then you'll have to adjust the brownie cooking time and it will be thicker.

Can I make brownies with Graham Crackers too?

Absolutely! Over in the UK, graham crackers aren't available, so we substitute them for digestive biscuits. If you have access to graham crackers, then definitely use them if you would prefer.

To store: Store your fudgy S'mores Brownies in an airtight container at room temperature for up to four days.

To freeze: The brownies can be frozen. I recommend freezing them in an airtight container, prior to covering them in fluff. Thaw overnight in the fridge and then layer the marshmallow fluff over the top.

If you tried this Fudgy S'mores Brownie Recipe or any other recipe on my website, please let me know how you go in the comments below. I love hearing from you. Also, please leave a star rating whilst you're there!

Don't forget to subscribe to the newsletter, so that you don’t miss out on more delicious food, tips and news but also the chance to download your FREE DESSERT E-BOOK! Happy baking friends!

This post was originally published in November 2019 but has been updated with new photos and new content. It also has a revised recipe utilising store-bought marshmallow fluff as opposed to homemade marshmallow fluff as previously specified. This was to simplify the recipe and make it more approachable. 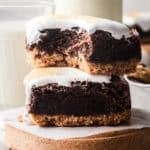 Step-by-Step Photos: My blog post includes helpful step-by-step photos to help guide you through making this recipe. To store: S’mores brownies can be stored in an airtight container at room temperature for up to 4 days. To freeze: The brownies can be frozen. I recommend freezing them in an airtight container, prior to covering them in fluff. Thaw overnight in the fridge and then layer the marshmallow fluff over the top. TIP 1: Leave an overhang around all sides of your baking pan. The brownies can be removed from the baking pan seamlessly and easily. TIP 2: Compact biscuit base. Make sure the biscuit base has been pressed down really well to ensure it doesn't crumble apart once baked. TIP 3: Heat the chocolate in the microwave for speed. Want to melt the chocolate and butter in the microwave instead? No problem, cube and chop ingredients until small and then microwave in 20-second increments until fully melted. TIP 4: Use a hot knife to get clean cuts. Wait for the brownies to cool, top with marshmallow fluff, and then refrigerate for at least one hour before cutting. Then heat the blade of a sharp knife under hot water, wipe dry and slice. Heat and dry before every cut.