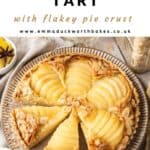 With pear season in full swing, it's the perfect timing to make this incredible Frangipane Pear Tart, also known as Tart Bourdaloue. Using my foolproof Sweet Short Crust Recipe (Pâte Sucrée), the tart shell is flaky and crisp and creates the perfect housing for the filling.

The frangipane filling is fragrant, nutty and sweet. I use the same filling in my Plum Frangipane Tart as it accompanies fruit perfectly. Today we use delicately spiced poached pears to create this Bourdaloue tart. It's perfect for Fall baking.

❓What is a Bourdaloue Tart?

Pronounced 'bour-da-loo', the origin of Tart Bourdaloue stems from a street in the 9th arrondissement in Paris. This Parisienne street, Rue Bourdaloue, housed a pâtisserie in which the chef created this famous French tart.

Made with a sweet shortcrust pastry, the tart shell is filled with a sweet almond cream and baked with sliced, poached pears and flaked almonds.

Originating from Italy, it's an almond cream made from butter, sugar, eggs, ground almonds and flour. It's beaten together to create a smooth, creamy filling. It's thick but spreadable and has a nutty, sweet taste from the ground almonds.

Frangipane is predominantly used as a filling in tarts, pastries and desserts. Flavourings such as vanilla extract, almond extract, chocolate, citrus zest and alcohol, such as rum, can be added to boost flavour.

The ground almonds can also be substituted with other nuts such as ground pistachios, hazelnuts or walnuts. It's super versatile. It's a wonderful filling that bakes to a beautiful golden colour with the most intoxicating nutty aroma. Bliss!

Whilst Sweet Short Crust Pastry is traditionally used, you can use an all-butter pastry, such as that used in my Caramel Pie. Alternatively, if short on time, then use store-bought dough or a pre-made tart shell.

What Are The Best Pears To Use?

Ones that don't soften too much when baked are best. We want them to hold their shape from poaching and all baking in the oven. My preferred varieties are Anjou Pears, Bosc Pears and Conference Pears.

Pick pears that are ripe but still firm. Underripe pears lack in flavour, whereas over ripe pears poach in less time but will become too soft too quickly.

I have seen in many recipes that canned or jarred pears can be used too. They require no poaching and can be drained and sliced, then baked into the French Pear Tart immediately. It's a time-saving hack if you prefer.

👩🏻‍🍳 How to Make a Pear Frangipane Tart

The Pear Frangipane Tart is constructed into three components, the shortcrust pastry, the almond frangipane filling and the poached pears.

The first step is to poach the pears, as it's actually better to let them cool whilst still in the poaching liquid. It helps the flavour soak into the pears even more, and you know I'm all about maximising flavour!

How do You Poach Pears

STEP 2. Prepare pears and poach. Whilst the liquid is heating. Peel, half then core the pears (Image 1).

TIP: Turn the pears over after 10 minutes so that the tops don't brown (Image 3).

STEP 4. Add the egg and mix. Add in the lightly beaten egg and use a fork to mix it through the flour mix (Image 5).

Then add half the water and, using your fingers, toss it through. The dough will start to clump together (Image 6). Add more water sparingly, a teaspoon at a time, until a shaggy dough forms. You may not need all the water.

Bring the dough together with your hands, gently squeezing it into a ball and then shaping it into a disc (Image 7). Wrap well in plastic wrap and refrigerate.

TIP: If your environment is warm, pop the whole bowl with flour in it into the fridge ten minutes before starting to make the dough. Run your hands under cold water too.

STEP 5. Roll dough out and line the tart tin. Roll the dough out to a rough 12inch circle (Image 8).

Fold dough over the rolling pin and gently lift and place it over a fluted tart tin with a removable base. Gently press the dough into the sides without stretching it (Image 9).

Trim excess dough by running the rolling pin over the tart tin and removing excess (Images 10 & 11). Refrigerate the base for 30 minutes.

TIP: The tart base requires blind baking, essentially baking the pastry without the filling with pie weight to prevent it from puffing up. It's an extra step that's totally worth it.

If the filling were added to the tart shell and baked all at once, the pastry would not cook properly and end up raw. Par baking the base results in a crisp, flakey crust- exactly what we want.

STEP 6. Par bake base. Preheat the oven to 180C/350F. Remove the base from the fridge and dock the base with the tines of a fork (Image 12). Line the base with parchment paper and fill with pie weights (Image 13). These can be ceramic baking beans, rice, lentils, sugar or a combination.

Bake the Pear Frangipane Tart for 15 minutes. Remove the paper and pie weights. Dip the pastry brush into the beaten egg to be used for the frangipane (no need to use a separate egg), and brush the base of the tart with it (Image 14).

Return the tart base to the oven for another 7-10 minutes until lightly golden (Image 15). The base is now par-baked.

STEP 7. Make the filling. Cream the butter and sugar until pale and creamy with a handheld electric beater (Image 16). Add the beaten eggs, ground almonds, flour, almond extract and salt and mix until combined (Image 17).

STEP 8. Slices pears and add to the filled tart shell. Remove pears from the poaching liquid and drain them on a paper towel (Image 18). Cut them crosswise but leave the pears intact (Image 19).

Spoon the frangipane almond filling into the base of the tart shell. Level off with an offset spatula (Image 20). Gently lift the pear slices intact, and place them on the filling with the stem end facing inward and fanning around (Image 21). Sprinkle almonds around the pears over the frangipane.

STEP 9. Bake. The poached pear tart bakes for 40 minutes until the frangipane is golden brown (Image 22). If the pastry or almond flakes start to brown too quickly, then tent the tart in aluminium foil. Once baked, remove from the oven.

As is a tradition in France, once baked, the tart can be brushed over with warmed apricot jam. This adds a little sweetness to the tart but also a glorious sheen.

If you want to include it, then add a tablespoon of boiling water to the apricot jam and mix it together. Brush over the pears (Image 23). (An option is to brush the baked frangipane too, but I prefer not to. But you do you!

The Pear Frangipane Tart is now ready to serve! The tart is best served warm or at room temperature with a dollop of creme fraîche or whipped cream. Just like my Pecan Tart, I recommend serving this Pear Tart on your next Holiday get-together or at Thanksgiving.

What's the difference between a frangipane and Bakewell tart?

A Bakewell tart is a traditional British tart with a jam layer in the bottom of the pastry tart and then topped with the frangipane filling. After baking, it's covered in a cherry fondant.

How do I know if my frangipane is cooked?

You'll know when the frangipane is cooked through as it will turn golden on the top and will rise up. If you want to see, more frangipane filling around the pears, then push them into the filling before baking.

Is frangipane a custard or a cake?

It's a custard-type filling originating from Italy. It's a thick, sweet almond-flavoured custard used to fill a variety of pastries and tarts rather than be baked on its own.

❄️ Can I Make the Pear Tart Ahead of Time?

Absolutely. Here's how you can break down the three components of this Pear Frangipane Tart to make it more time efficient and spread the hands-on time over a couple of days.

The tart can be stored at room temperature, wrapped well in plastic wrap for up to 3 days and in the fridge for up to 5 days.

The tart can be frozen. Cool down completely after baking. Wrap well in plastic wrap and freeze in a zip lock freezer-safe bag for up to two months. Thaw overnight in the fridge and warm for ten minutes or so in a 180C (350F) oven.

If you tried this Pear Frangipane Tart recipe or any other recipe on my website, please let me know how you go in the comments below. I love hearing from you. Also, please leave a 🌟 star rating too! 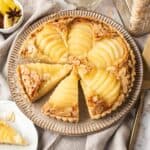 Make the Frangipane and Assemble the Tart

Step-by-Step Photos: My blog post includes helpful step-by-step photos to help guide you through making this recipe. To store. Tart can be stored at room temperature wrapped well in plastic wrap for up to 3 days and in the fridge for up to 5 days. TIP 1: Use Cold ingredients. Cold butter and ice-cold water are imperative when making short crust pastry. TIP 2: Don't overwork the dough. Add just enough water for the dough to clump together and don't overwork it. TIP 3: Refrigerate the dough when required to create a tender, flaky pastry. TIP 4: Keep an eye on the poaching time for the pears. They should poach until a knife can cut into the flesh easily.