Soft, fluffy Homemade Cinnamon Rolls with Brown Butter Cream Cheese Frosting are hard to beat. The enriched brioche dough is light and pillowy, filled with sweet brown sugar and cinnamon. The brown butter cream cheese frosting that gets slathered onto these rolls when fresh out of the oven is next-level perfection for your breakfast, dessert, or snack.

This recipe uses my enriched brioche dough recipe that forms the base for many delicious recipes. It's soft, buttery, comes together easily and works perfectly to make bread, scrolls, rolls, babka and donuts. Don't be intimidated by it! In my post, I have step-by-step process shots and plenty of hints and tips so that you know exactly what you need to do.

Confession time, I only started eating cinnamon last year. And only in these Homemade Cinnamon Rolls!! My whole life, I’ve veered away from ANYTHING with cinnamon. I could smell it a mile off in any dish, and you’d only see the back of me as I ran.

However, with a family, sometimes you have to make a dish that you otherwise wouldn’t like to eat for yourself. My eldest daughter, Malia, loves cinnamon rolls and has begged me constantly to make them. Finally, after all my no’s, I relented and said YES! She was as surprised as I was! Once baked, I reluctantly tried the roll - and stopped the press- loved it! So a couple of recipe tests later, here we are with this fab recipe for you.

This is one of those recipes where you’ll have all the ingredients needed in your pantry and fridge (fingers crossed anyway!) The list isn’t exhaustive, and they are all pretty basic. Here’s What you’ll need to make these dreamy Homemade Cinnamon Rolls.

First things first. Let’s talk about the enriched dough we use to make these Homemade Cinnamon Rolls With Brown Butter Cream Cheese Icing. The quantity of butter makes for the super-rich, buttery bread. Proving the dough twice allows for it to become soft and pillowy when baked. Totally dreamy!

Luckily for you, I have a whole post dedicated to making brioche dough and all the hints and tips you need to succeed. I aim to debunk the myth that it's hard to make. In my post, I have all the process shots and step-by-step instructions you need to make this beautiful dough.

How to make Homemade Cinnamon Rolls

Once the dough has had its first rise and been refrigerated (for 2 hours) or frozen (for approx 45 mins), it's time to shape and cut our tasty cinnamon rolls. Let’s go through the process:

1. Prepare the pan and roll out the dough. Grease a round baking dish or pie pan with butter (alternatively, line the dish with parchment paper so you can lift the scrolls out.

On a lightly floured surface, roll the dough into a rectangle. It should measure approximately 0 x 48cm (12 x 18-inches).

2. Cover dough in butter and cinnamon sugar. Smear the softened butter all over the surface of the rolled-out dough. The butter has to be super soft so as not to tear the dough. If necessary, place in the microwave for ten seconds to soften. But don’t melt it! (Image 1 )

In a small bowl, mix the cinnamon, brown sugar and salt together, then sprinkle this evenly all over the butter. (Image 2 & 3)

TIP: Size of pan and number of rolls

In the images that I’m sharing with you today, you can see that I made 7 cinnamon rolls that baked in a round pie pan. Now, these 7 are BIG cinnamon rolls. The same recipe can be used to make 12 rolls baked in a rectangular pan. See the tip in Step 3 to know how to cut more rolls and what pan to use.

3. Roll the rectangle into a log shape. On the long edge, roll the dough up as tightly as possible without pulling or stretching the dough (Image 4). Pinch the seam closed all the way along with your fingertips. (This stops the roll unravelling once you've cut it. (Image 5)

4. Cut into roll. Slice the two ends off with a sharp knife. They can be a bit raggedy. Using the knife, cut the log into seven equal pieces. (That's how many I cut for large rolls to fit into my round pan. See TIP below for how to make 12 rolls. (Image 6)

Instead of making seven large homemade cinnamon rolls as I did, you can make 12 standard-sized rolls. Once the dough is rolled tightly into a log, the ends are cut off, then sliced in half, and then cut each of those halves in half. You'll have four long logs now. Cut each of those four into three equal size pieces. Voila, there you have 12.

Rather than a round baking dish, use a 23cmx33cm (9x13inch) rectangular dish to fit them all in. You can see that I have done this in my Rhubarb Scroll post if you’d like a visual.

5. Place in the pan. Place the cut cinnamon rolls on their sides with the beautiful scrolls facing up into the dish you’ve prepared. If they have become a bit misshapen from cutting, then now is the time to use your fingers to make them round again gently. Ensure there is a little space around all the rolls. (Image 7)

6. Second rise then bake. Cover the pan with plastic wrap and let the dough rise in a warm place for 45 mins. The dough visually has to expand by at least half its original volume. (Image 8) See the difference in images 7 & 8 above.

Whilst the dough is on its second rise, this is the time to preheat your oven to 180°C (350°F). Once risen, remove plastic wrap and bake for 25-30 minutes until golden brown. (Image 9 below) Halfway through, cover the pan in aluminium foil if the rolls are browning too quickly.

If you aren't going to cover the rolls in a cream cheese frosting (or even if you are!), then to get that nice sheen to the baked dough, a tip is to egg wash before baking. I did this to my rolls for the photos to show the beautiful sheen you get (see Image 9).

Make the egg wash by beating one small egg and one tablespoon of milk together in a small bowl. Once the rolls have had their second rise in a warm place, remove the plastic wrap and branch the egg wash onto the tops of the scrolls. Bake as instructed.

How to make Brown Butter Frosting

At this point, remove the butter from the heat and pour it into a separate bowl, scraping the browned bits off the bottom, as this is where the flavour lies. Set aside for 20-30 minutes to cool down to room temperature.

8. Make the frosting. In a separate bowl, using electric hand-held beaters (or a stand mixer fitted with the beater attachment), cream the brown butter and cream cheese for about 5 minutes until pale and fluffy.

I adore this Homemade Cinnamon Roll Recipe as there are quite o few ways of adding in different ingredients to create your own favourite flavour profile.

What’s the difference between cinnamon rolls and cinnamon buns?

Cinnamon rolls most likely have some form of vanilla or cream cheese frosting on top of the rolls. With sticky buns, they don’t have any frosting and will have a lot of the sugar/butter filling mixture sprinkled into the base of your baking pan to form a gooey, sticky layer once baked. Preppy Kitchen shows perfectly how to make Sticky Buns.

Why are my cinnamon rolls not fluffy?

If there is too little flour, then the dough will be sticky and won’t have enough structure to rise, resulting in dense, soggy rolls.
If there is too much flour in the dough, then it will turn out dry and crumbly once baked.
Your best bet is to weigh your ingredients using digital scales for an accurate and reliable way to create this and every recipe!

Can you make cinnamon rolls the night before?

Absolutely! Once you've cut your scrolls and placed them in your baking pan, ready for their second rise...this is your chance to refrigerate them. Wrap the baking pan tightly in plastic wrap and pop it in the fridge overnight. The next morning, take the dish out of the fridge and let it stand at room temperature for 45 minutes to 1 hour, and then bake as per the recipe instructions. There’s nothing like waking up to warm scrolls for breakfast!

To store: Homemade Cinnamon Rolls are definitely best eaten fresh and warm straight out of the oven. If you do need to store them, then place the rolls in an airtight container and store them at room temperature for 2-3 days or in the fridge for up to 5 days. Microwave for 10-20 seconds to freshen them up as they will dry out the longer you keep them

To freeze: These tasty cinnamon rolls can be frozen. Place in a freezer-safe container and freeze for up to 3 months. Thaw completely before serving or reheating.

I love this dough and am slowly amassing quite a few recipes using it. Take a look and save them for later.

If you tried this Homemade Cinnamon Rolls Recipe or any other recipe on my website, please let me know how you go in the comments below. I love hearing from you. Also, please leave a star rating whilst you're there!

Don't forget to subscribe to the newsletter so that you don’t miss out on more delicious food, tips and news and the chance to download your FREE DESSERT E-BOOK! Happy baking, friends! 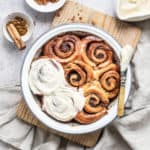 To Store:  Glazed Cinnamon Rolls are best served on the same day but can be stored at room temperature in an airtight container for up to 3 days or in the fridge for up to 5 days. Microwave them for 10-20 seconds to freshen them up and enjoy. To Freeze:  Store rolls in a freezer-safe airtight container and freeze for up to 3 months. Thaw completely before serving or reheating. Serving Size:  These make 7 large rolls. You can make 12 standard-sized rolls by cutting the roll with your dental floss (or knife) into 12 even pieces and baking them in a 23x33cm (9x13inch) baking pan. For Overnight Rolls: You can easily turn these into overnight rolls. Once the dough is filled with the brown sugar-cinnamon mixture, rolled, sliced, and placed in the prepared pan, wrap the pan tightly in plastic wrap and refrigerate overnight. The next morning, remove the pan from the fridge and take off the plastic wrap. Let the rolls sit at room temperature for 45 minutes before baking as per the instructions. TIP 1: Chill the dough after its first rise to make the process of rolling it out, filling it and cutting into individual rolls easier. TIP 2:  Use softened butter for the brown sugar cinnamon filling. Too hard and you'll tear the dough when trying to spread the butter. Melted butter will run out of the filling. TIP 3: Use dental floss. Sounds bizarre I know - but food photographers trick for cutting the rolled log into neat individual slices is to use unflavoured dental floss to make the cuts!